Activity Group 2: Walker and the Story of the Silhouette

Ask learners to do some observation work on Walker’s “Pastoral”. 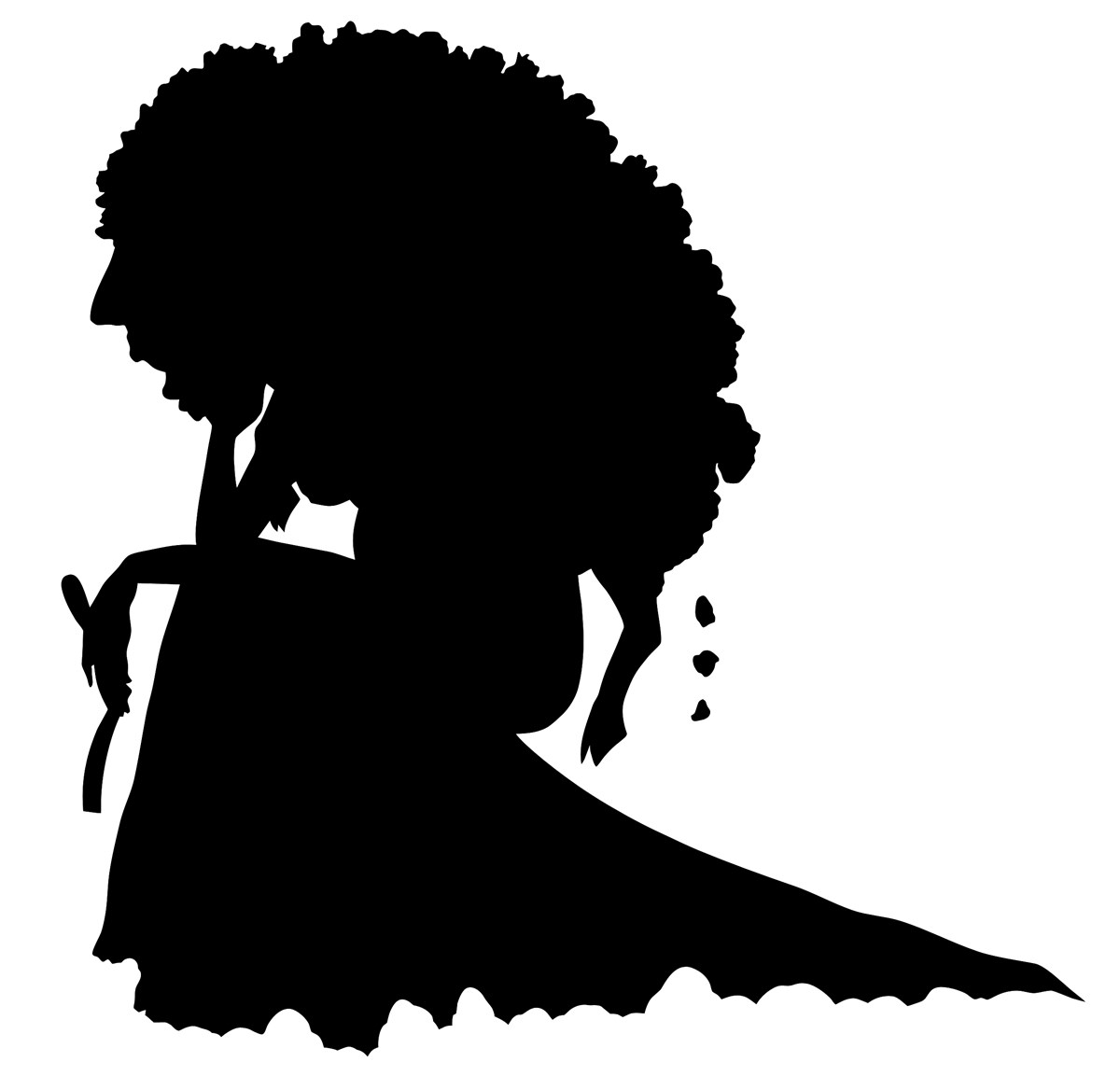 1. Take note of what you see and write down at least five observations. No detail is too small.

2. After noting what you observed, take a moment to explore some of your thoughts in writing. Given your observations, what do you think this artwork means? What is happening? Who or what is represented and how do you know? What questions do you have? (Ask at least three.)

3. After doing this observation work, consider the artwork’s title. Where does the title take your thinking? Does the place or time of the figure(s) become more or less clear? What new questions do you have? (Add at least two.)

A popular form in the 18th and 19th century, the silhouette actually dates back to antiquity, where we can find them on Greek vases and Egyptian tombs or graves. A silhouette is, very simply, someone’s profile, usually cut out from black paper. Silhouettes were often considered a feminine or women’s art form because they could be made in the home.

Although also called “shadow portraits” and “shades” in the eighteenth century, the name "silhouette" dates back to one Étienne de Silhouette in France. In 1759, he became the controller-general for King Louis XV and was so irresponsible with the royal budget that his name became associated with “cheapness”. Silhouette artists in the period began calling their artworks “silhouettes” in order to sell their work more easily than more expensive painted profiles. As writing paper became more available and affordable, silhouettes became an accessible form that enabled many people to have familial or individual portraits in their homes.

Another influence on the silhouette’s rising popularity in the nineteenth century was the pseudoscience, or fake science, of physiognomy, which was based on the belief that a person’s appearance—especially their face—revealed their true personality. Physiognomy was used as a basis for scientific racism, a belief that argued we could easily see and classify people according to how they looked—the white, Anglo-European face was considered the “normal” one.

As photography became increasingly accessible in 1839, photographs replaced silhouettes as a popular form of portraiture.

After reading the brief summary on the history of the silhouettes above, go back to your work with Walker’s “Pastoral.”

1. Given your observations and close reading notes, where do you see Walker referring to aspects of this history? In other words, what details point you to it?

2. Finally, develop some writing and thinking around why you think Walker is referring to the silhouette in this artwork. What about the silhouette does she ask us to notice or rethink?

While some may know the word “epic” in the context of expressions like “that trip was so epic,” an epic traditionally refers to a long poem that tells the story of a heroic journey or the story of a nation. (More traditional or canonical examples of the epic are classical poet Homer’s "The Odyssey" or Virgil’s "The Aeneid", although more recent poets, like Gwendolyn Brooks, have continued to compose in this form). A “myth” also tells the story of a nation or community. We often learn aspects of Greek or Egyptian mythology in school, such as the origin stories of ancient gods and goddesses. Myths are often considered fictional, unproven stories that nonetheless become important to a community or nation’s history and identity.

Building upon Walker’s use of the silhouette in the previous activity, we invite learners to consider how Walker puts the silhouette in conversation with the epic and the myth by engaging her artwork "Emancipation Approximation."

1. How does this artwork ask us to reconsider how the history of slavery is represented?

2. How does this artwork ask us to reconsider the stories we are told about our country’s history?

Before moving into the artwork’s contexts, take a few moments to make some observations about the first print from Walker’s "Emancipation Approximation." 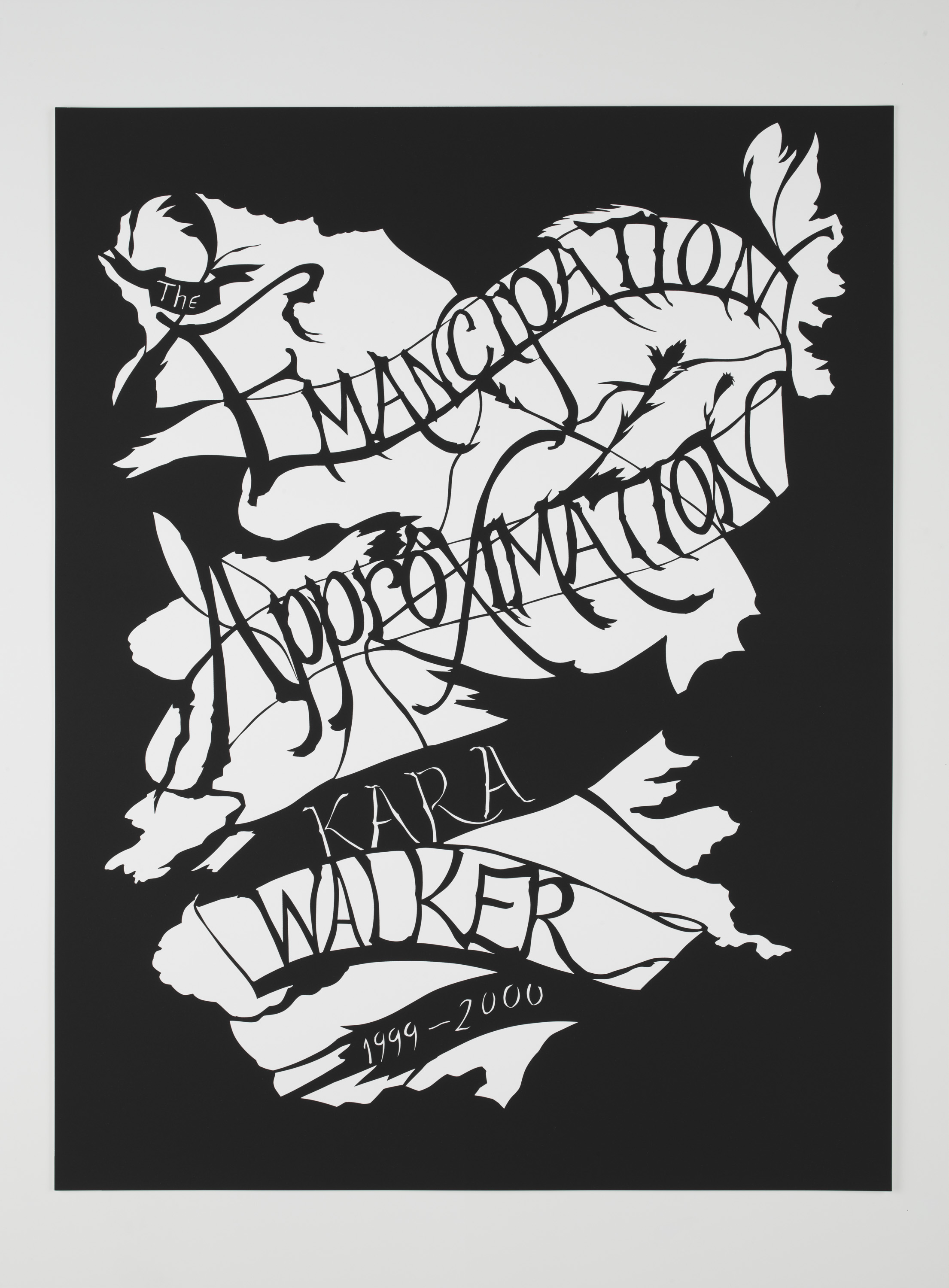 1. What do you see? Consider shape, color, and any other detail.

2. Next, look at her title—what do you notice? Write down any and all noticings.

3. After this initial engagement, read or have someone read to you the brief text below on the
"Emancipation Proclamation from 1863".

Emancipation Proclamation Historical Context:
During the Civil War’s third year, Abraham Lincoln issued the "Emancipation Proclamation" on January 1, 1863. As summarized by the National Archives, “the proclamation declared ‘that all persons held as slaves’ within the rebellious states ‘are, and henceforward shall be free.’” The summary continues, “Despite this expansive wording, the Emancipation Proclamation was limited in many ways. It applied only to states that had seceded from the United States, leaving slavery untouched in the loyal border states. It also expressly exempted parts of the Confederacy (the Southern secessionist states) that had already come under Northern control. Most important, the freedom it promised depended upon Union (United States) military victory.

Although the Emancipation Proclamation did not end slavery in the nation, it captured the hearts and imagination of millions of Americans and fundamentally transformed the character of the war. After January 1, 1863, every advance of federal troops expanded the domain of freedom. Moreover, the Proclamation announced the acceptance of black men into the Union Army and Navy, enabling the liberated to become liberators. By the end of the war, almost 200,000 black soldiers and sailors had fought for the Union and freedom.”

For more on this subject, continue reading this particular summary or see our Additional Materials for further reading.

Given what you just read, return to the title of Walker’s artwork and compare what you previously observed with what you now know about the "Emancipation Proclamation."

What does the title of her artwork say about her point-of-view on this historical event?

Before looking at each of the 27 silkscreen prints that make up “Emancipation Approximation,” do one more close reading of this individual print. 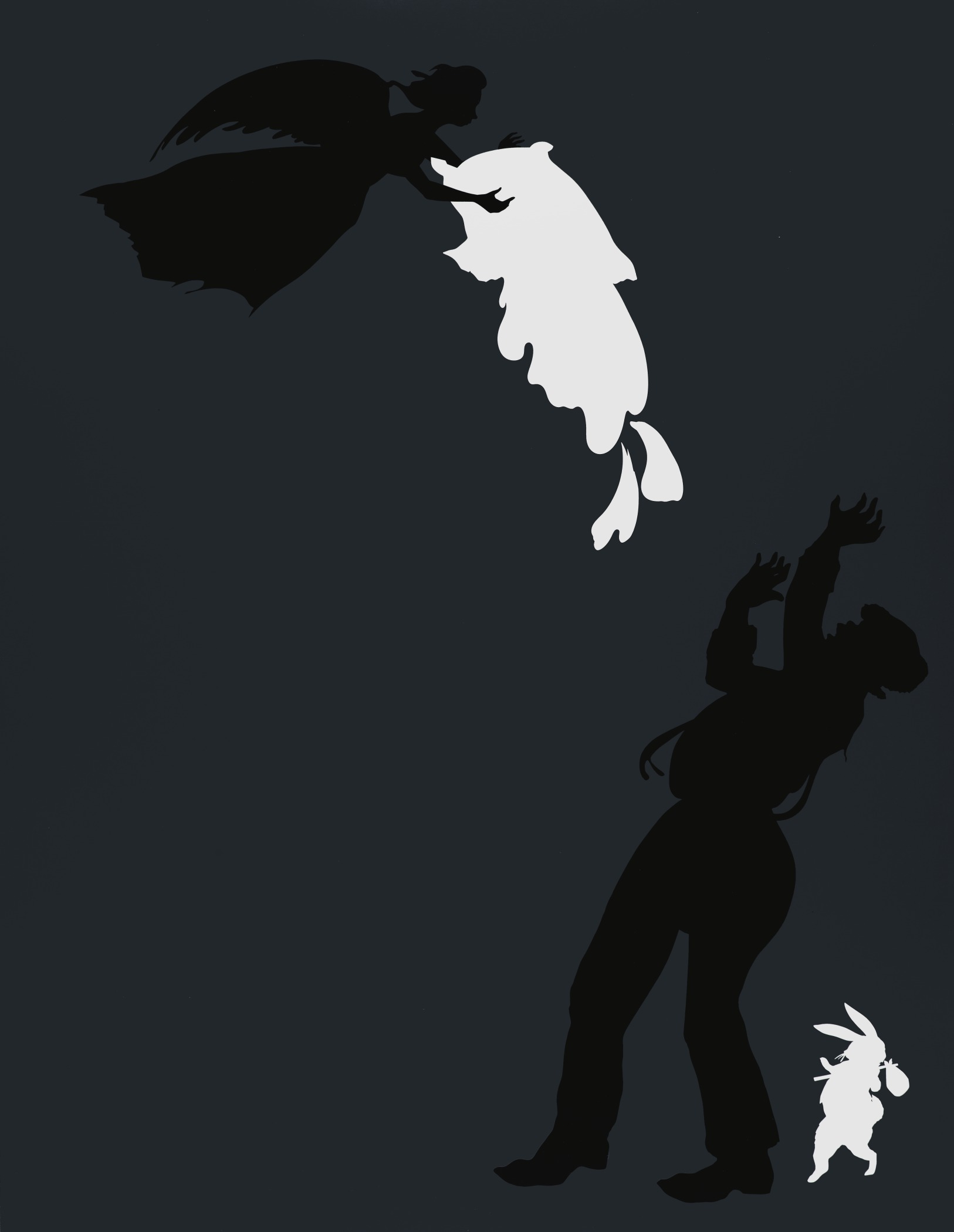 1. Make at least 5 observations about what you see, considering shape, color, and background.
Then move onto questions—asking at least 3-5 questions drawing from your observations.

2. Finally, take a moment to brainstorm in writing what you think is happening in this image. From here, jot down some ideas as to what you think Walker’s “Emancipation Approximation” as a whole is about? What story might it tell about slavery in the United States?

Walker’s “The Emancipation Approximation” is a 27 page portfolio of silkscreen prints that evokes the style and scale of Walker’s large installation works. When installed in a gallery, the work begins with the title page that you’ve analyzed already and moves through a visual narrative using the silhouette form for which Walker is known. 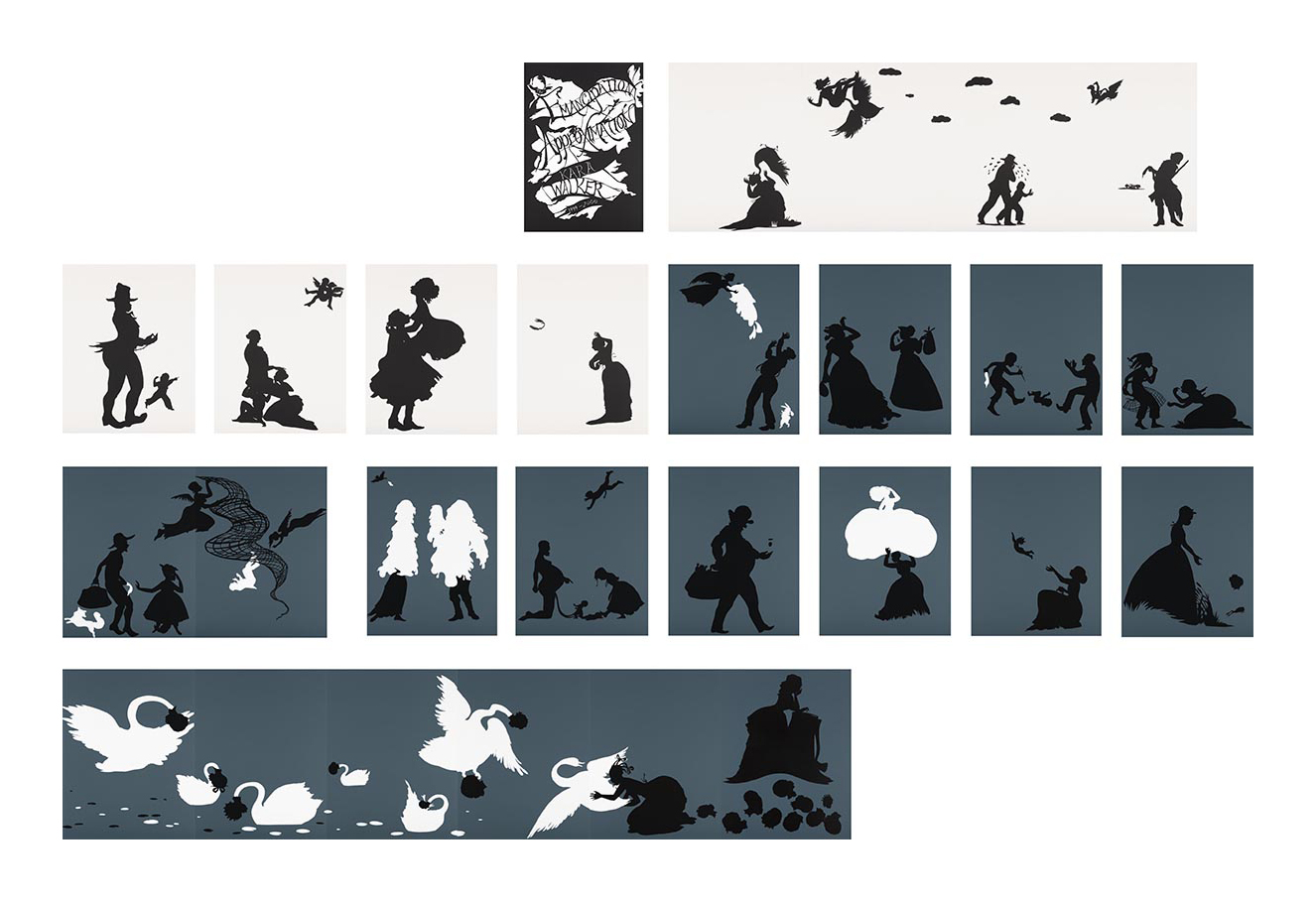 Scan through each of this artwork’s images, many of which evoke complex and disturbing forms and figures, as seen in the image carousel above.

1. As you look through each of the prints, write down observations and first impressions, especially those that center on your reactions and responses to the confusing, violent and sexually violent scenes.

2. Take a moment to consider, aloud or in writing, what story of American slavery is Walker telling? How does she represent history?

1. Looking over Walker’s “The Emancipation Approximation,” identify figures that you see repeatedly in the work and write these down.

2. After doing so, take a moment to brainstorm ideas about why Walker repeats these figures. Don’t worry about being wrong or right, just get some of your thinking down. What associations or connections can you make in relation to each figure? You can do a Bubble Map for each one if that helps you to brainstorm and visualize your own thinking.

3. Spend some time thinking and writing in response to these questions: How is Walker commenting on the story of America’s past through this artwork? What might she be saying about the epic or the myth?

4. What are your questions? Write down at least 2-3 at this stage.

In this piece, Walker draws on imagery related to the Greek myth, “Leda and the Swan.” In this myth, the god, Zeus, becomes attracted to a mortal woman named Leda. Already married to his goddess wife, Hera, Zeus disguises himself as a swan in order to rape and impregnate Leda without anyone recognizing him.

Although Walker uses this myth, she also refers to the pervasive sexual abuse of primarily black women in the slavery system in the United States. Because of “one drop” rules, when an enslaved woman had a child from a forced encounter with a white enslaver, this child was also considered a slave even though their father was a free white man. More information on this topic here.

Look back at the repeating figures you noted and to your work in Exercise 8.

2. Where do you see Walker referring to this complex and difficult history of rape and enforced labor? Locate the particular silhouettes that strike you as most relevant. Once you have at least 2-3 in mind, spend some time writing and thinking. What do you see? How is Walker using color and shape in relation to this history?

3. Now that you have a bit more context around Walker’s “Emancipation Approximation,” we invite you to return to the swan figure you close read earlier on. What do you see now? How does it differ from what you initially saw?

Walker's particular use of the silhouette, its colors of black and white and its various bodily forms and figures, asks us to rethink what we see and how we see it.

Given the work you have done throughout this section, we invite you to more directly analyze how Walker's often exaggerated silhouettes points to their relationship with the concept of the stereotype.

1. Looking back at her "Emancipation Approximation," where might you see Walker pointing to particular stereotypes? List at least a few observations grounded in this artwork.

Once you have done so, please continue to engage your thinking around her use of stereotype through responding to one or all of the following questions:

2. How does Walker use the silhouette to trigger our thinking around stereotype? What might this have to do with identity, inclusive to gender and race?

3. What does the stereotype have to do with the myth or the epic?

4. How is Walker asking us to rethink stereotype? What aspects of her use of bodily form and figure are important to this?

5. Is it possible to use a stereotype to question or confront a stereotype's limits or shortcomings?

After having gone through this Activity section, we invite you to take a moment to respond in writing to the following questions. After writing, you can also engage in discussion with a partner or a small group to share your responses.

1. How does Walker's "Emancipation Approximation" ask us to consider "how history is represented"?

2. How does this artwork ask us to rethink how the history of slavery is typically represented, not represented, or mis-represented, in our textbooks, curriculums and national stories?

3. How does this artwork ask us to rethink our narratives of progress, in which we position the past as something "behind" us? In other words, does Walker's artwork ask you to rethink the relationship between the past and present? If so, how? If not, why?

4. And finally, what questions do you have that you would like to share with us? Please write to us.

A.R.T. acknowledges the invaluable generosity, assistance, and enthusiasm of all who contributed to Reading Resources production:

This program is supported, in part, by public funds from the New York City Department of Cultural Affairs, in partnership with the City Council.

All images are protected under copyright by the original rights holders.